“Maybe we should take our mountain bikes instead”, I said to Dan as we packed our snowboard bag, only half joking. It was mid December and there was worryingly little snow in the Alps. And with only a few centimetres forecast before the return of more mild temperatures, it certainly didn’t look like we were going to get much snowboarding on our first trip of the season. Fortunately we weren’t just going for the snow and were visiting friends who live in St Gervais, but I’d be lying if I said that the chance to get in some early season turns wasn’t a major motivation. 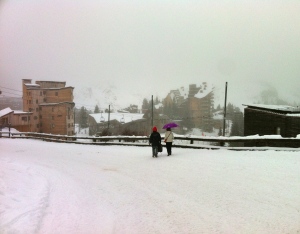 It’s always a gamble booking a ski or snowboarding trip before Christmas. Sometimes it pays off, like the year before last, where we experienced some of the best powder we’d ever ridden, and sometimes it doesn’t, as was almost certainly going to be the case this time. Arriving in Geneva it felt like it could easily have been spring, and the temperature didn’t change dramatically as we climbed towards St Gervais. The next day our spirits were lifted when it started to snow, but sadly it soon turned to rain. Our only comfort was that it ought to be falling as snow higher up, but even that wasn’t a certainty.

With neither St Gervais, Les Contamines nor Chamonix open, the next again day we decided to head to Avoriaz where we hoped the previous night’s precipitation might have fallen as snow. By the time we reached Les Gets and Morzine it became glaringly apparent just how bad the snow shortage was. The slopes were almost completely bare, and a discarded umbrella by the otherwise deserted mountain base was a poetically depressing sight that seemed to sum up the situation perfectly. 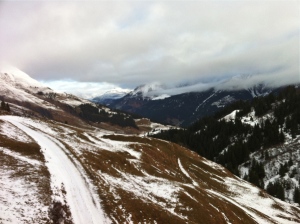 It was raining lightly as we climbed up to Avoriaz, and the higher we got, the more desperately we willed it to turn to snow. Sadly it didn’t and on arrival we were disheartened to find almost as many people carrying umbrellas as skis and snowboards. There has to be only one thing more depressing than a lack of snow in a ski resort and that’s rain. However, encouraged by the fact that there seemed to be plenty of people on the slopes, we jumped on the lift, optimistic that it might be snowing at the top. But it wasn’t.

Wiping the drizzle from our goggles and congratulating ourselves for having invested in GoreTex outerwear last season, we strapped on our boards and prepared to make the most of it. Amazingly, other than being a little heavy in places, the snow was actually pretty good and we managed to get some great runs in the limited area that was open. The snow cover was good, however, a chairlift ride over The Stash with its features looking ridiculously unridable, revealed just how much snow was still needed for the resort to open fully. Unfortunately my GoreTex indulgence hadn’t stretched to gloves, and after a couple of hours my usually trusty Hestras were like saturated sponges, and my hands resembled anaemic prunes. 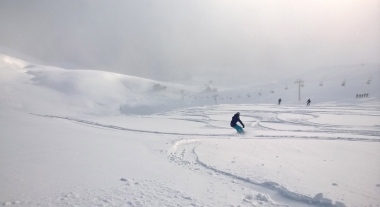 While it certainly wasn’t the first day of the season we’d dreamed of when we booked the flights back in October, full of hope for a stellar start to the season, we left feeling pretty happy with the day we’d had given the way things had panned out. Unexpectedly ok as it was, we weren’t exactly desperate to head back the next day, especially as conditions weren’t forecast to be any different. There was, however, a decent dump of snow forecast in a couple of day’s time, which coincided with Les Contamines’ (rescheduled) opening date of Saturday 20 December. 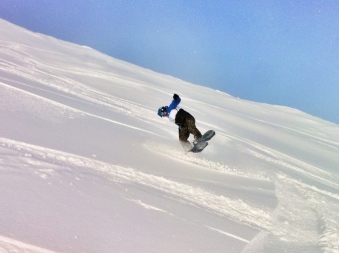 Fortunately the forecast came good and we headed up to Les Contamines for first lifts on the Saturday morning. The snow was pretty average lower down so we went right up to the top as soon as the upper lifts opened. As we rode up the top lift we could barely contain our excitement at the sight of an open bowl full of fresh, untouched snow. As we climbed higher, the people who’d been ahead of us on the lift started to descend, leaving deep tracks in the snow and us even more desperate to get up there. By the time we got to the top there was still plenty of untouched pow for us to get freshies too, which we took great pleasure in doing. We lapped that lift until the entire bowl was tracked out, and then some more. It was better than we could ever have hoped for and we left feeling totally elated. When we got back down to the town it felt like spring again and was hard to believe that we’d been blasting through fresh powder less than an hour beforehand.

We left a few days before the massive storm that caused travel chaos on the busiest weekend of the season but saved the resorts from a disastrous New Year’s week. Unfortunately the turnaround in conditions didn’t last long and the slopes are once again in dire need of replenishment. Hopefully things will pick up in the Alps soon but until they do I’ll be sticking to the slopes of Scotland, on my mountain bike!

Have you been riding yet this season? How was it?