Looking around at the grand pulpit, rows of pews, and ornate stone features of London’s Union Chapel it seemed fitting that we were here to see the god of backcountry snowboarding. This divine setting played host to the UK premiere of Higher, the final part of Jeremy Jones’ epic trilogy, and the great man was there in person for us to worship. 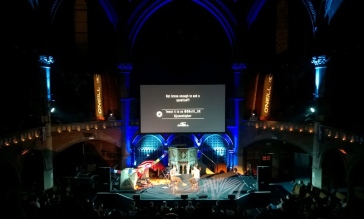 Unsurprisingly the event was a sell out and when we rocked up ten minutes after the doors opened, there was already a massive queue running right the way along the street. We headed up to the balcony and chose a pew that was ideally situated to take in the beautiful surroundings and get a perfect view of the big screen and spot in front of the pulpit where His High(er)ness would be speaking.

Jez, as I feel I can call him that now that we’ve ‘met’, introduced the film and made an instant connection with the audience by reminding us that he too came from somewhere low and flat before climbing, quite literally, higher.

The film begins by touching on Jones’s upbringing on Cape Cod, Massachusetts in the early 80s and his progression from professional slalom racer to ten-time ‘Big Mountain Rider of the Year’. 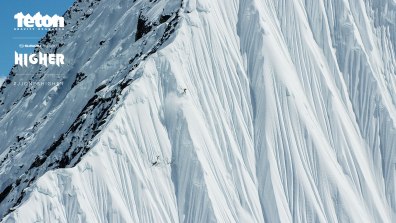 Jeremy Jones isn’t a man who does things by halves. Like the previous two films in the trilogy, Deeper and Further, Higher follows him as he seeks out new and ever more challenging locations in which to test his riding skills and endurance. As the title of the film suggests, the focus of this installment is his assault on a series of previously uncharted vertiginous peaks.

Higher focuses on three separate expeditions, to Grand Teton in Wyoming, Alaska and the Himalayas, and follows Jones and his carefully selected riding partners (Bryan Iguchi, Ryland Bell and Luca Pandolfi) as they experience everything from the ultimate highs to most crushing lows in remote parts of some of the most inhospitable mountain ranges on the planet.

Not one for heli drops, Jones is a true mountaineer for whom a big part of the challenge is accessing his chosen lines under his own steam, even if that means being stuck for days in massive storms with nothing but a tent for shelter, which it invariably does. 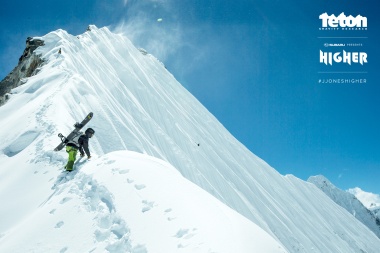 They target seriously impressive terrain with near vertical spine walls that look impossible to climb, let alone ride. At one point we see Jones and Pandolfi scale a 2,000ft near-vertical face, one energy sapping step after another, only for the weather to close in as they reach the top and thwart their descent. Over the course of the film it becomes apparent that these type of set backs are commonplace, and that for every few minutes of exhilarating descent, there are invariably hours, days or even weeks spent at the mercy of mother nature at her most brutal.

The film culminates with Jones embarking on his biggest challenge yet when he heads to Nepal to take on the Shangri La spines in the Himalayas – the biggest he’s ever seen. After weeks of preparation involving acclimatisation, trial ascents and descents, he finally attempts the line he’s been aiming for. Conditions are sketchy, to say the least, and he describes it as: “the hardest thing I’ve ever done”. It may not have turned out to be the dream line that he’d hoped for but in getting down that spine on the Shangri La, he certainly fulfilled his brief. After all, short of riding down Everest, you can’t really get much ‘higher’ than that.

Higher isn’t your average snowboarding movie. At 1 hour 40 minutes long, it’s a feature length documentary on the incredible feats of a true backcountry snowboarder and mountaineer. Unlike many freeride snowboarding films, which edit together footage of perfect descents, deep powder, backcountry kickers and pillow lines, this is a realistic, warts and all account of backcountry riding in its rawest form. Jeremy epitomses the notion of “earning your turns” and the ascents he takes on are equally as impressive as the descents.

Although there’s inevitably a certain amount of aerial footage, much of the action 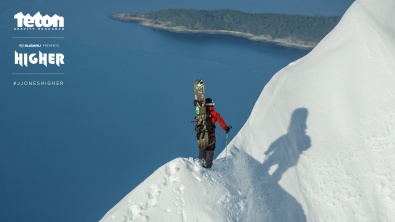 is filmed using head cams, which make you feel like you’re there with them on every precarious ridge and heart stopping turn. Almost.

There’s also a refreshing absence of lingering shots of logos on boots or boards, or energy drinks being consumed. This is not a vehicle to promote Jones’ range of snowboards, or at least not directly. We know they’re riding Jones boards but other than the odd uncontrived glimpse of the logo, you wouldn’t know. There are obviously nods to his handful of sponsors but these are at least subtle.

The film by no means glamourises Jones’s adventures and doesn’t necessarily leave you longing to get yourself a splitboard and transceiver and hit the backcountry. Instead I was left reflecting on the hostile nature of the mountains, and the skill and expertise required to tackle them – something that was confounded further still by the end credits which dedicate the film to several of Jones’s close friends and mentors who’ve lost their lives in this perilous 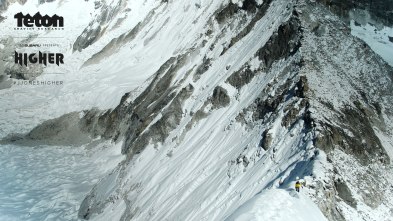 playground. And although I’m not a particularly religious person, our situation in this place of prayer and worship made it seem all the more poignant.

I obviously wasn’t alone as the subject was raised in the Q&A session after the film, where Jones spoke of how hard he’s been hit by the deaths of his friends and heroes. He also touched on the inner conflict he now faces as a dad, continuing to put himself in potentially life threatening situations and risking leaving his kids without a father. It’s certainly not something that he takes lightly and acknowledges that “taking stupid risks is definitely irresponsible”. Ultimately though, he just can’t imagine living his life in any other way and feels it’s important for his kids to “see people living life and drinking life up as much as possible”.

Have you seen the film? What did you think?

One response to “Higher Calling”

Over to you... Cancel reply